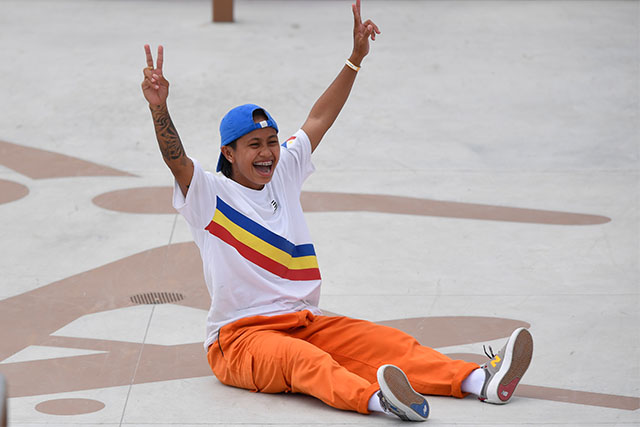 TV presenter Bianca Gonzales was among those who noticed it and shared how much it made him smile.

She also added her own photobombed photo by Didal in the Twitter feed.

“She’s such a golden human being huhu,” Gonzales said.

She is such a golden human being huhu pic.twitter.com/BRzuvcZw6I

You can use it by first clicking on your profile picture and then, from the drop-down list, choose the “Add frame” option.

In the list of frames, choose the “Olympian Didal Good Vibes.” The frame will then give you a smiling Didal photobombing your own profile picture.

This Facebook filter finally reached the Cebuana skateboarder and she changed her profile picture on July 29 with the meme filter of her own face.

The social media update had since been shared more than 1,000 times on the platform.

A Twitter page for Philippines weather updates showed pictures of the weather situation in the country with Didal’s smiling face on the side.

the 2 lows near Hong Kong and east of Taiwan may intensify a little tomorrow, deepen the monsoon trough and bring rain to northwest Luzon. Be careful! pic.twitter.com/9ZsmdYB1TG

Although she did not land on the podium, she gained on the internet that even fans of other skaters acclaimed her for her cheerfulness and sportsmanship.

Didal will later be seen partially stealing the show on Instagram Stories, interviews and snapshots of other athletes as she smiled and posed behind them.

Media from other countries also noticed his fun vibes and shared happy photos of his interactions with their reps.

READ: ‘When you see it’: Margielyn Didal’s photobombing sparked joy in Tokyo